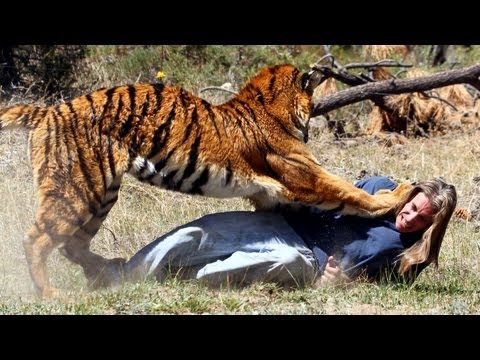 MEET the only man in the world who can withstand a full-scale assault by a 400lb tiger. Fearless Randy Miller, 45, has trained big cat Eden to leap 15 feet and pile-drive him into the ground in an inch-perfect fake tiger attack. It then looks like Randy's days are numbered as the huge predator then mauls him on the floor. But it's all part of the duo's purr-fect act - as Randy walks away unharmed. Dad-of-two Randy rears his star animals from birth and uses his lifelong bond with them to achieve wild things on the big screen. He bottle fed Eden when she was a cub, and eventually taught her to jump on him for food rewards. Randy's predator stunts are so astonishing they landed him a top stunt award for his work on Russell Crowe blockbuster Gladiator after - they superimposed Crowe's face onto Randy for a famous scene when main character Maximus was attacked by one of Miller's tigers, Tara, in a Colosseum battle. At his special animal training facility in Big Bear, California, Randy has trained amazing creatures for roles in Transformers 2, The Last Samurai and many other movies.