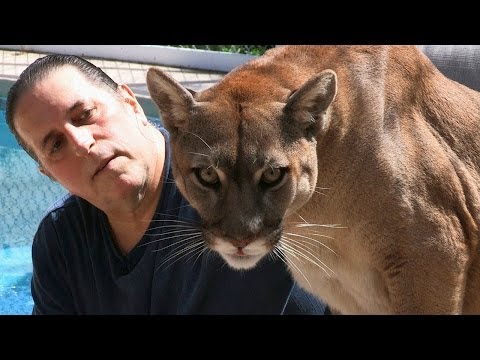 MOST women would be horrified to find their husband asleep in the arms of a cougar. But when you're married to the 'Cat Man' Mario Infanti you have to accept the other lady in his life - a 15-stone MOUNTAIN LION called Sasha. The 41-year-old adopted the powerful animal as a kitten and she now sees him as her 'mother'. Sasha has the power to tear his face off but he still let's her sit on his lap while he watches TV and has dinner. He and his wife Lenore, 53, chose not to have kids of their own to raise Sasha and have spent thousands on her upkeep. Mario, 63, who lives in Cape Coral, Florida, has been criticised for keeping Sasha as a pet but he says she would be worse off in the wild where he says she would be hunted and persecuted by humans.