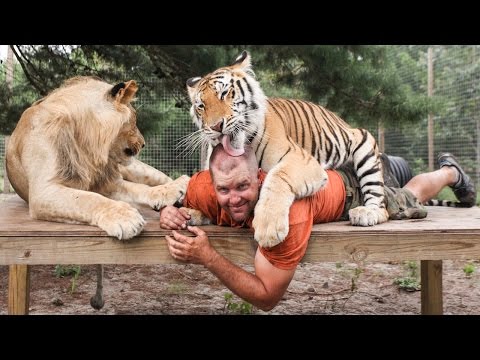 Big Cat Enthusiast Owns Six Tiger And Two Lions
SUBSCRIBE: http://bit.ly/Oc61Hj
A BIG cat enthusiast keeps six tigers and two lions in his back yard with one of his beasts weighing a massive 700lbs. Carl Bovard knows that he is dicing with death every time he wrestles with his huge felines but considers it a risk worth taking to raise awareness about endangered species. Carl set up Single Vision – his educational, non-profit company – nine years ago and welcomes tours to his house and garden where his wild animals live with him. His biggest tiger is a Siberian named Samson – he weighs more than 700lbs and is over nine and a half feet tall when he stands on his back legs. Before they go out into the massive enclosure in Carl’s back garden all of his animals live in his modest Florida home. Despite the controversy that comes with keeping and breeding big cats in captivity Carl believes that his organisation is helping tigers and lions.