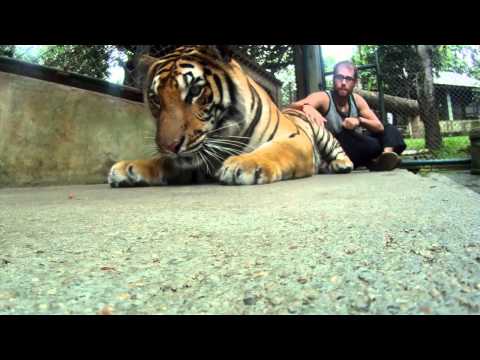 The Tiger Kingdom & Restaurant,one of Chiang Mai's latest tourist attractions opened its doors for business just under a year ago.

The "kingdom" is located on the Maesa road just outside Mae Rim approximately 18kms (11miles) from Chiang Mai and takes around 20-30 minutes by Taxi to get there.

The Tiger Kingdom is one of only two such ventures in the whole of Thailand that allows the visitor an "up close & personal" experience with the tigers, allowing them to play, stroke & take photos in the tigers ACTUAL ENCLOSURE !!.

Since opening the tiger kingdom has had a considerably "mixed bag" of reviews, there are some that say "it was the highlight of their stay in Chiang Mai" and "we had heard mixed reports about the park, but were really happy to see that the animals were being really well looked after, in clean & pleasant surroundings" to others who have said "it is cruel & inhumane to house wild animals in such enclosed spaces, they also appeared drugged and sedated", and "exposing these wild animals to a procession of different visitors must increase the risks that the tigers will attack people!

Based upon these opinions I felt the only way to offer our viewers an unbiased opinion was to actually go along & see for myself.

Based upon other peoples comments that the tigers appeared to sleep for large parts of the day, with the best times to see them fully active being either early in the morning, or later in the afternoon, we arrived at the park at just after 10am.

There is no entrance fee to enter the park, and you are free to walk around to view the tigers behind their fences, but for the "up close & personal" touch, you have to pay.

For 200thb you can also have a professional photographer take around 200 photos for you to record your exploits & have them downloaded to CD for you, this is well worthwhile, as it then allows you 100% attention to the tigers.

Once you have decided on which age group you want to visit, (quite a few people on the day we were there were actually visiting all three age groups),paid your fees & read the various disclaimers,you are shown to the compounds where your chosen group of tigers reside.

The enclosure door is opened and you sheepishly walk in.... NO fences, NO barriers between you and these absolutely stunning wild animals, WOW the adrenalin rush is incredible !!.

Rose (my wife) chose the cubs as the "cuddliest" size to meet face to face, and to be honest I also think she was slightly concerned by the "playfulness" of the adolescents & the overall size & power of the adults.

There were at least 8 of the small cubs in the particular enclosure that Rose visited. They were all awake and quite frisky & playful, chasing each other around, and wrestling one another to the ground.

Rose was accompanied into the "den" by two young handlers, who both carried sticks with them and would occasionally tap on the end of the tigers noses, if they became too boisterous or frisky.

Rose would pat & stroke them but was always very careful & watchful of them, even at this young age the tiger cubs can cause quite serious injuries by just scratching or "play" biting the visitors.

Rose's summary of her exploits with the tiger cubs could best be described as incredibly exciting, whilst also bordering on a high level of fright for these cuddly yet dangerous animals.

I asked her a couple of simple questions:

And for me, I was the perfect reporter, making all the notes, but at a safe distance.

The other "attraction" we had heard mixed reviews about at the Tiger Kingdom was the Restaurant which has the unique perspective of offering its diners open air views of wild tigers whilst you eat your selected meal.

The quality of food & service on the particular day we visited and the unique ambience were 1st class, it was not cheap by Chiang Mai standards, but was very nicely presented & tasty.
My summary of our visit to the Tiger Kingdom would be as follows, we had a very pleasant visit to the park, its clean, the handlers are really helpful, the service & the food was very good.